Make Sushi Rice
If you love sushi but you’ve never made it yourself, you’re missing out! Learn how to make sushi rice yourself to enjoy your favorite treat at home. 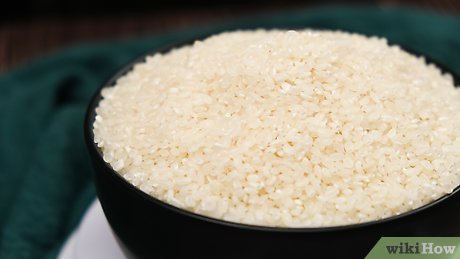 Purchase the correct rice. Sushi is usually made with special Japanese white hulled sushi rice, commonly called sushi rice. It is a high quality short grain that is sticky and slightly sweet rice (not to be mistaken for glutinous rice).

For best results, go to Asian stores and ask specifically for sushi rice. High quality rice will have very few broken grains. Real sushi rice has a good balance of starches (amylose and amylopectin) so that the rice sticks together when you’re using chopsticks to bring it from the plate to your mouth. Most of the time it will be labeled “Sushi Rice”. Equipment and seasonings such as bamboo sushi-making mats, bamboo spatula, nori sheets and sushi vinegar (Asian white vinegar that has been sweetened is also usable) can also be found there.
If “Sushi Rice” is unavailable, the closest alternative is Dongbei rice (a strain native to North-east China whose natural environment resembles Japan’s cold climate). Its level of sweetness and stickiness is extremely similar to sushi rice. Dongbei rice is roundish and pearly. and has the rare property of never reverting to the texture of uncooked rice after cooking i.e. will not harden but retains its soft texture, even after it becomes cold. This trait is essential for making authentic sushi and onigri. Dongbei rice is a high quality type of Chinese rice, while relatively expensive, it is still cheaper than “Sushi Rice” and can be found in quality/major Chinese grocery stores. The other alternative is to buy “Sushi Rice” online.
A cheaper choice is Calrose, some brands are Botan Calrose and Kokuho Rose.
Other rice species will most likely be long-grain (commonly found in supermarkets) such as Basmati. Long-grain rice will not bind and is incapable of coming close to the taste and texture of sushi rice. Brown rice is unhulled wholegrain rice of any species. Brown rice is never used in authentic sushi making, but can be used for healthier eating.

2. Measure out the rice
Measure out the rice. Depending on how hungry you are, if there are appetizers, desserts, whatever, 600 grams (21.2 oz) (1.32 pounds) should be adequate for four adults, if your meal includes an appetizer and perhaps something for dessert. 600 grams is also often a very good portion for your regular-sized stove pot, in that you get about a half-filled pot of rice which seems to give the best result, moisture and texture wise. A rice cooker is the most dependable way of making rice.

3. Next, rinse and soak the rice
Next, rinse and soak the rice. One way to do this is by finding a really big pot that you can fill with lots of cold water. Rinse the rice by pouring lots of cold water onto it, then use your hands to move the rice about in the water bath so that it gives off as much as possible of those little dirt and starch particles that make the water all greyish. You don’t have to do it very long, just give everything a good tumbling, then pour the water out again, as much as possible. Alternatively, you can put the rice in a strainer and put the strainer in the pot; fill the pot with water, agitate the rice, then lift the strainer out of the pot so you can pour out the milky water. Do this some four or five times, until the water seems relatively clear. After the last rinse, pour fresh water over the rice one last time and leave it to soak for about half an hour. Some sources recommend letting the rice sit, drained, for thirty minutes to an hour.

To boil, you’ll need 100 milliliters (3.4  fl oz) of cold water for every 100 grams of rice – that is, the weight of the rice before you let it soak, which in this example would mean 600 milliliters (20.3 fl.oz.) of water as we started out with 600 grams (21.2 oz) of rice. Whatever container you used to measure out the rice, use the same to measure out the water. Put the water with the rice in a pot or rice cooker, put on the lid (not to remove it again until the rice is done), and you turn up the heat to high. If you are using a rice cooker, let it do its thing; skip the next two steps, and go straight to cooling the rice (once the rice has finished cooking, of course). There is also the possibility of making sushi rice in the oven, as described in the section below. Otherwise…

7. Optional: Let the rice cool down
Optional: Let the rice cool down if you don’t want it to get too sticky while you season it. The trouble about cooling it down is that we don’t want the rice to dry out by leaving it on the kitchen table reacting with the air, and we also want it to cool down rather quickly. A good tip is to use a couple of clean kitchen towels dampened with cold water (not wet!). Spread one on the table, spread the rice on top of it (remember not to scrape the bottom, we don’t want that half-burnt rice down there in our sushi), and place the other towel on top of the rice, so the air doesn’t dry it up. This way, you should be able to cool the rice in about an hour.

8. Make the su
Make the su. For those interested, the word sushi is actually a compound of the word su – which means vinegar – and the word shi – which means “skill of hand”. So, sushi basically means something like mastering the art of vinegar. You need a good rice vinegar, some salt (please, coarse salt, not fine, too many additives are put in this stuff to keep it from clumping, and they don’t taste very good!) and some sugar. Because different brands of vinegar taste very different, it’s a good idea to sample your way through the process by tasting on it along the way. But, a good rule of thumb says that for each 100 millilitres (3.4 fl.oz.) of vinegar, you’ll need to add three tablespoons of sugar and one-and-a-half teaspoon of salt. Put it all in a pot and heat it up while stirring, until everything’s dissolved. Now, adjust the mixture by tasting it – too vinegary? Add sugar. Not enough taste? Add salt. Not quite there? Add vinegar. Then cool to room temperature. 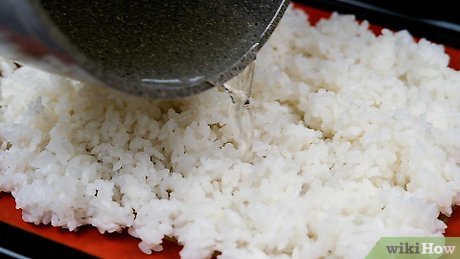 Mix the su and rice. Traditionally, this is done with a hangiri, which is a round, flat-bottom wooden tub or barrel, and a wooden paddle. Alternatively, you can use a baking pan or cookie sheet (but not aluminum foil – it’ll react with the vinegar). You toss the rice gently with the su, using a gentle chopping and flipping motion with a paddle, and let the heat escape (if you haven’t cooled the rice already). Otherwise, the rice will continue cooking in its own heat. You can also spread the rice so that it cools down faster, but be sure not to mash it!

Adjust to taste. Add a little su, then stir around (gently) with a wooden spatula or spoon, taste. Not enough? Repeat. You’ll probably end up using somewhere between 100 and 250 millilitres of su for the portion we’re making here. Remember not to try to get too much taste or saltiness out of the rice by adding su – the reason we don’t use salt in the rice in the first place and don’t want the su to make the rice salty is that sushi is dipped in soy sauce which is very salty indeed.
Use the sushi rice at room temperature. If the rice is still warm, cover it with a damp cloth (so it doesn’t dry out) and leave it be until it reaches room temperature. Sushi tastes best when made from freshly cooked, unrefrigerated rice.

10. If you must refrigerate, then reheat by gently steaming or microwaving with a piece of lettuce leaf or cling wrap lightly covering the rice (so that it does not dry out) until the texture returns to that of soft, freshly cooked rice

If you must refrigerate, then reheat by gently steaming or microwaving with a piece of lettuce leaf or cling wrap lightly covering the rice (so that it does not dry out) until the texture returns to that of soft, freshly cooked rice. If you are using sushi rice or Dongbei rice (which does not harden like other types), slight heating is enough. If refrigeration was light, returning it to room temperature may be adequate. 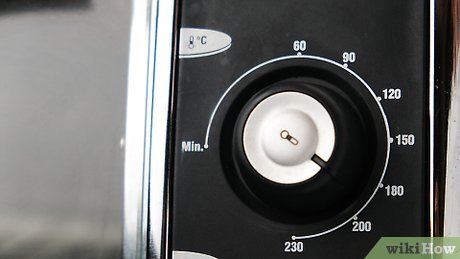